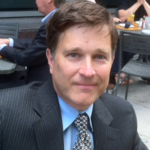 He speaks regularly on the subject of rainwater harvesting at conferences on the local, regional and national level. Examples include the Water Quality Association (WQA) Aquatech Mar/2014,Green Roofs for Healthy Cities North America (GRHC) Nov/2014,United States Green Building Council (USGBC) Oct/2014. He is approved by AIA to teach a rainwater course for Continuing Education Credit, a program designed for architects, contractors and engineers.

Van Giesen works with the International Code Council (ICC) and International Association of Plumbing and Mechanical Officials (IAPMO) in the development of Green Plumbing Codes for Rainwater and Stormwater. He assisted the states of NC and GA in developing plumbing codes permitting rainwater use in coordination with the International Code Council (ICC) in 2009-2010. He successfully worked with the California Building Standards Commission in 2012 to include Chapter 17 (Rainwater Harvesting Provisions) in the California Plumbing Code. Along with California Assembly member Jose Solorio, he contributed in the passing of AB1750,the California Rainwater Harvesting Act of 2012.