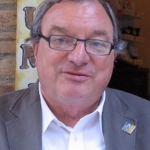 Stephen Vogel, FAIA, is a professor at the School of Architecture at the University of Detroit Mercy. He served as Dean of Architecture for 18 years. During that time he focused the school’s mission to be engaged in service to underserved urban communities and to educate future architects committed to building sustainable cities. To that end he co-founded the Detroit Collaborative Design Center, a university-based center providing professional design services to non-profit civic and community organizations and created the Master of Community Development degree program. The School and the Design Center have been recognized with the National Council of Architectural Registration Boards 2002 Grand Prize and 2009 Prize for the Creative Integration of Practice and Education in the Academy.

Professor Vogel has lectured extensively across the country and internationally on the plight of post-industrial cities and is a founding principal of Schervish Vogel Consulting Architects, PLC. He has over forty years of experience in architecture, urban design, interiors, and historic preservation. He has directed projects that range from multi-family housing, adaptive reuse, historic preservation, urban design, and master planning of large scale, mixed-income communities. He has received AIA National, Regional, and local Honor awards for design. Professor Vogel was also the Consulting Principal-in-Charge of the interior restoration of the Detroit Opera House, which received a national American Institute of Architects Honor Award for Design and was a Principal Architect for the Harmonie Park Redevelopment Project which received a national AIA Honor Award for Urban and Regional Design.

Professor Vogel was inducted into the College of Fellows of the American Institute of Architects in 1994 and was President of AIA Detroit and AIA Michigan. He is currently on the national AIA Strategic Council representing the architects of Michigan and was recently made a Richard Upjohn Fellow of the AIA.