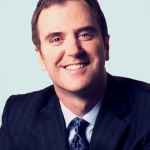 Paul Woolford, AIA, IIDA, LEED AP is the Design Principal for HOK San Francisco; responsible for some of HOK’s most complex and creative buildings. He leads an interdisciplinary team comprised of architects, engineers, interior, landscape & product designers, and urban planners.

His designs have been honored with numerous awards including: Research & Development Magazine’s “Laboratory of the Year Award” in 1997; “Regional, State and National AIA Design Excellence Awards” in 2006 for the State Archives and Library of Georgia; the “AIA California Council Design Excellence Award” in 2008 for the Wind Portal at the SF BART Station; and various accolades from the USGBC for LEED Platinum and Gold certified projects.

Paul earned his Bachelor of Architecture at Cornell University with honors in 1983. He has been active in the American Institute of Architects at the state level as an officer, and at the national level, was named an “Outstanding Young Architect of the Year.” He has both chaired and been a juror for numerous AIA design awards. Additionally, Paul has taught design at the University of California, Berkeley; Cornell University; and Savannah College of Art & Design. He lectures around the world on environmental and design issues for organizations including AIA, USGBC, SCUP, MAAM, ULI and the National Trust for Historic Preservation.