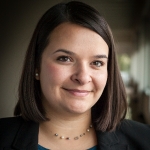 Jennifer Workman is a registered architect and an Associate at VLK|Architects where she serves as the Architecture Director for their Dallas office. She received a Bachelor of Architecture from the University of Texas at Austin and focused her studies on various museums throughout Europe. Her most notable project was the Perot Museum of Nature & Science where she worked in Los Angeles, CA under Morphosis on design and construction documents and then in Dallas on the construction of the museum.

Shortly after graduation, Jennifer became engaged in the American Institute of Architects and saw that she could give a voice to emerging professionals on the local, state, and national level. She served for two years on the Dallas AIA Executive Committee and five years on the Texas Society of Architects Board, including her role as Vice President of Member Services. Nationally, she served in various Chair positions focusing on emerging professionals and was most recently elected for the 3-year term of At-Large Director to the AIA Board of Directors.

Her interests have earned her a national AIA Young Architect Award, Building Design + Construction’s, 40 under 40, and the Texas Society of Architects William Caudill Award for Young Professional Achievement. Her efforts are also published in GA Document, Architect, AIArchitect, Texas Architect, and Columns magazines.