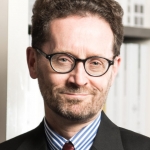 James Wright is one of seven senior principals of Page Southerland Page, Inc. ("Page"), and the Design Director of the firm's Washington, DC office. He currently serves as the Vice President of the new AIA International Region and as the Chair of the AIA International Practice Committee Advisory Group. James received his Masters in Architecture with Special Commendation from Harvard University’s Graduate School of Design in 1975 and his Bachelor of Science in Architecture, summa cum laude, from the Ohio State University two years prior. Following his graduate studies, James was awarded a Fulbright-Hays independent studies fellowship to Eastern Europe in urban design.

Since 1979 James has been actively engaged in the marketing, managing and delivery of architectural design services worldwide. His international career began in the Middle East and Far East while a studio design leader at Caudill Rowlett Scott (CRS). He continued his international practice as Senior Principal at HOK/Washington, DC and he joined Page as a Principal in 1997.

In addition to many overseas projects for the U.S. Department of State, James has foreign client project experience in Japan, Korea, China, Saudi Arabia, Egypt, the UAE, England, Mexico, Canada, Kuwait and in all, he has worked in over 40 countries. While pursuing and delivering design services internationally he has weathered difficult and dangerous political environments along with a range of opportunities in widely diverse locales. With each project he is sensitive to the local culture and traditions and this approach is strongly reflected in his design.