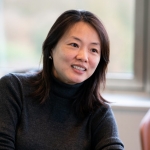 Tiantian Xu is founding principal of DnA_Design and Architecture Beijing Office. She received her Master of Architecture in Urban Design from Harvard Graduate School of Design, and her baccalaureate in architecture from Tsinghua University in Beijing. Prior to establishing DnA Beijing.  She worked at a number of design firms in the United States and the Netherlands. She has received 2006 WA China Architecture Award and 2008 Young Architects Award from The Architectural League New York.